Save Them All: A trip to Best Friends Animal Society in Utah 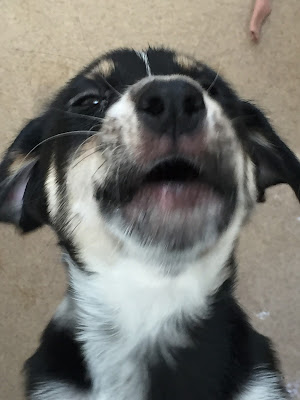 "Would you like to go where you've always wanted to go and do one of your favorite things ever?"

That's not how the press trip to Best Friends Animal Society sanctuary in Angel Canyon, Utah was put to me, but that's how I heard it. I've long wanted to see Utah and Best Friends held the promise of playing with dogs. And cats. And seeing horses, goats and probably a few other things that were on your See-and-Say: The Farmer Says. Animals never lose their magic.

This was one of the most magical trips I've ever been on (and I've been to the Playboy Mansion). I'm working on my story for Alternet right now; this is photo companion for pics of the things I talk about in that. I may post more on other aspects of the journey. 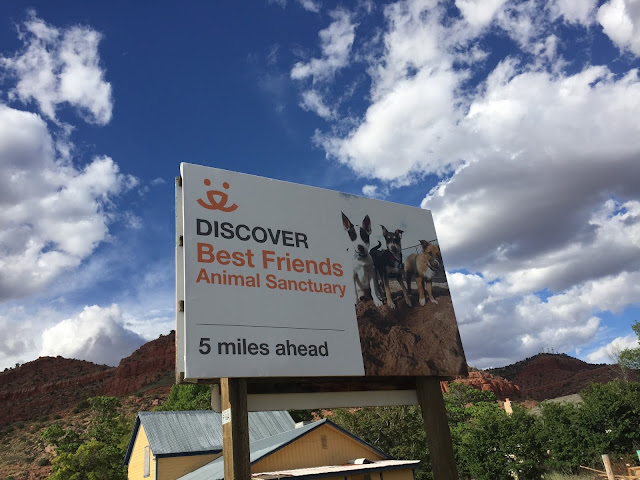 Wait. I just got it. That's what was different. This wasn't a trip. It was a journey, one I hope as many people get to go on as possible. 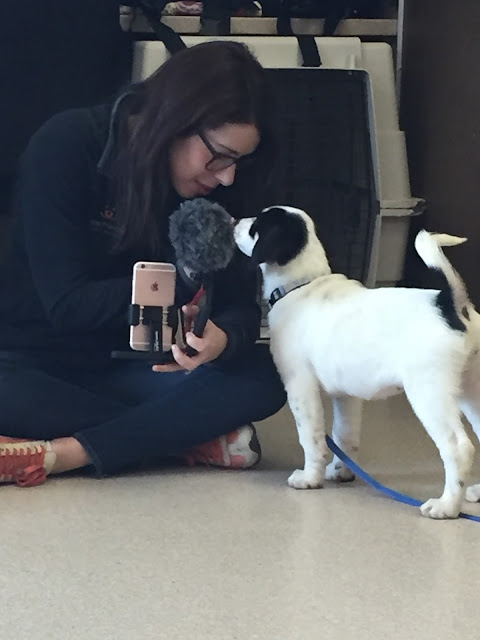 Above: Pima learning about cameras from Melissa Miller in puppy socialization class.


Above: The puppies love Glenn Pierce, behavioral consultant at Dogtown. 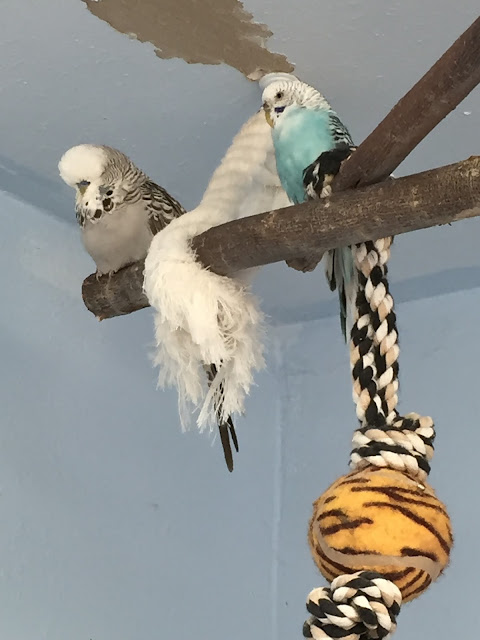 Above: Doody, right, a poor little budgie so overbred he can't see.

Above: This pig wants to go for a walk now and is blocking the manager from leaving until he gets his way. It doesn't work.


Above: Anne Rollin getting kisses from clicker trained bunny. She had the sweetest bond with them. 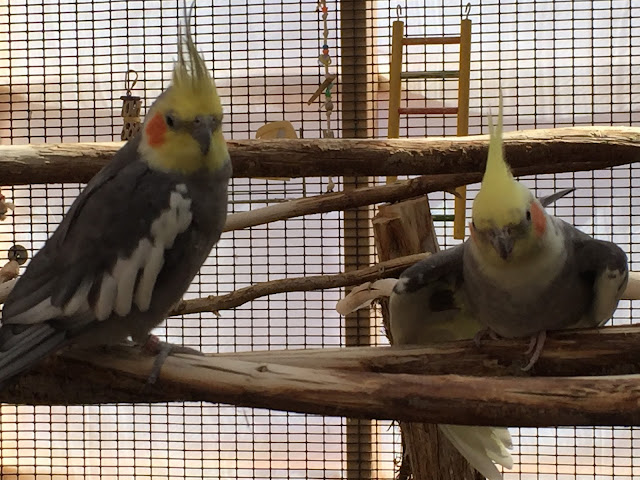 Because the manager said some of the dogs didn't like cameras I left my phone off in Dogtown. I wished I had a picture of my personal favorite dog, Lincoln, a 9 year-old lab who liked to talk but was also great at companionable silence. What a great dog. He's going to be someone's perfect buddy someday.


Above: Prince, the little foal who doesn't have a mom but has a stepfather named Feather (StepFeather?) 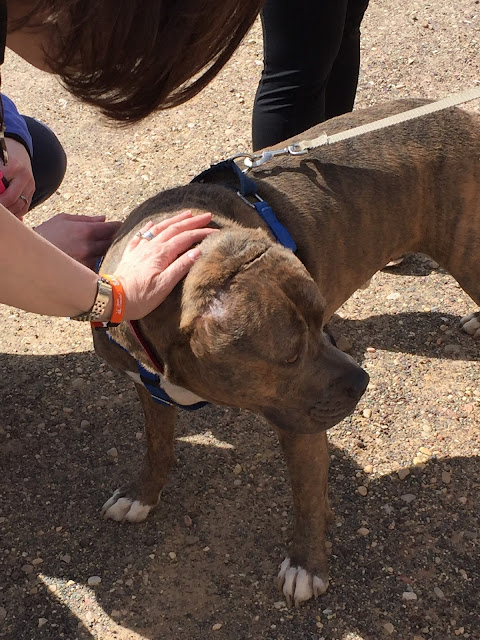 Above: Bubba, former fighting dog found in a Denver dumpster in terrible shape, a healthy, handsome guy, owned by Best Friends' Jacqueline Johnson. Here he is stoically accepting that everyone wants to meet him. 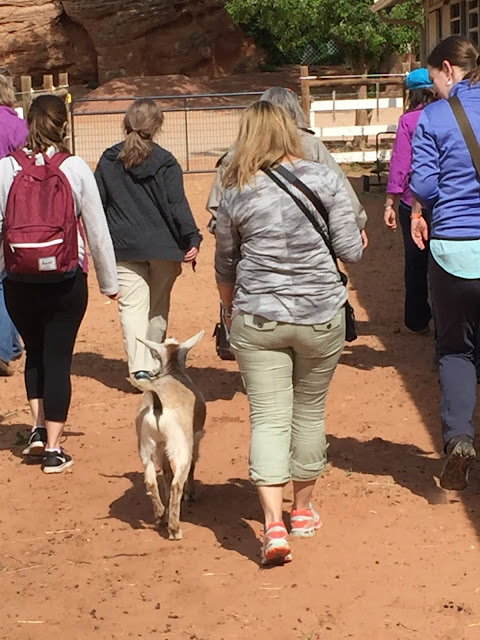 Popular posts from this blog

Liz on MyPleasure: A Reading of Jane Austen (while wearing vibrating panties) 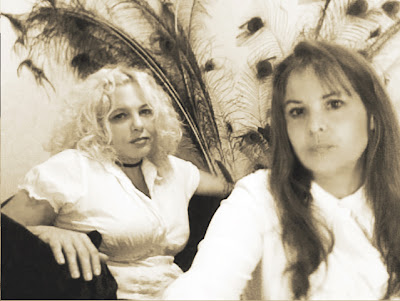 In MyPleasure Video: Putting the Astrea 1 Vibrating Panty to the Jane Austen test , it was my desire to see if remote control vibrating panties worked by reading Jane Austen  while wearing them...and seeing if I could continue to read while wearing them. Thanks to my friend Liz (pictured with me below; click the link above for video) I got to live the dream. There's nothing like having a friend of 32 years that you'd literally trust with anything. There's more about the actual product in the text - the video was just a fun experiment and I LOVE how it turned out. Hope you do, too! Enjoy!
Read more

Drumpf Scare: Why I Worry About the Drumpf Signs I DON'T See 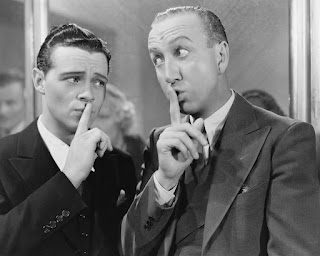 I have nerves like a chihuahua and since my traditional election night  vodka-and-Pepto has become too strong a beverage for me I just want  to be with like-minded people supporting Hillary Clinton. I asked a friend if he wanted to  join  me at a watch party.    “Can I wear my Trump undies?” he texted back. “Can I burn them in effigy? Not while you’re wearing them, of course,” I replied.  I was joking but the conversation gave me what I call Drumpf scare which is like a “jump scare,” the horror movie trope where a viewer jumps out of their seat in terror after being lulled into a false sense of calm. A Drumpf scares is when you realize someone you thought you knew might be a Drumpf supporter as I worried about my friend. It’s that same feeling as when you realize “The calls are coming from the inside of the house!” My guess is that there are a lot of dark Drumpfers out there, people who support someone I think of as the Hitlerian Cheeto, but who don’t want to be met
Read more